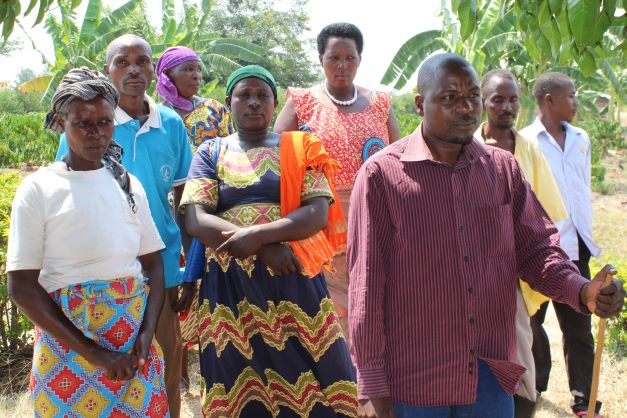 Growing up in Gwerere village in Western Uganda, Julius Tumushabe watched his father hunt for wild animals in the park. As a renowned poacher, his father made him innocently understand that the only way to get bush meat was by hunting down the animals.

Their proximity to Queen Elizabeth National Park, one of the largest protected areas in Kanungu district in the East African country, made this practice one of their main sources of income.

This provided nearby communities with a variety of options when it came to hunting for bushmeat.

So when Tumushabe turned 14, he got into the same business, to continue with his father’s ‘legacy’ by following his footsteps.

“I was a young boy when my father and my neighbours were hunters in Queen Elizabeth Park. When I got into my third year in Primary school, I dropped out to join him in the business because he was also getting old. I did it for 25 years,” he said.

Rwandanews24 recently paid him a visit in Kameme Cell in Ishasha, approximately 400km from Uganda’s capital Kampala. Tumushabe, now a reformed poacher vividly remembers his last moments as a ‘hunter’. Moments that made him make a U-turn on the practice.

Sometime in 2009, Tumushabe and three friends went into the park hunting like he did all the time. He would always hunt antelopes or buffaloes, which he’d come back home and slaughter some while the rest was sold to buyers.

However as he stayed in the wild waiting for the antelopes, the unexpected happened.

“I was pricked by a thorn and got injured such that I could not walk. The rest of my team went ahead to hunt for buffaloes asking me to stay at the same point as they would come back for me as soon as they finished hunting. They never came back,” he said.

He waited for two consecutive days in the wilderness, hungry, thirsty and unable to move to hope for his mates to come to rescue him.

“Other hunters came and found me instead. I was dying, I had not eaten anything and I feared for my life because, at this point, I was at risk of being attacked by a lion, or elephant or even a leopard and not be traced,”

They would then take him back to his home. By this time, Tumushabe had made up his mind, not ever risk his life for bush meat.

He said, “They found me sick, I was hungry because I couldn’t find where to get food. God protected me, no animals harmed me in the 2 days I was there, and they did not come into the area where I was sleeping,”

“I immediately told my wife that if she ever wanted any wild meat, she should not ask me because I will never go back hunting into the bushes,” he said.

For many communities living near the national parks, hunting is a normal activity. However, what they call hunting is instead referred to as poaching by law. Anyone found is at risk of not only years in jail, but a lump sum of money in fines.

It is after his experience that a Community Conservation Ranger approached Tumushabe. He was informed about the importance of conserving the part, and how the revenues earned from the government through tourism would trickle down to them.

“They talked me into working with them after they heard that I had quit the practice,”

He would then become an informer, notifying the authorities of attempts by other villagers to invade the wild for bush meat. This is because by the time he was leaving the ‘job’. Tumushabe had known all the routes and the hideouts used by poachers.

He would also notify the rangers whenever a wild animal invaded the community either attacking people or destroying crops.

I’d rather DIE with my children

However this was not an interesting job, it still put him at risk of being killed, this time not by wild animals, but by poachers.

“I started receiving death threats from my friends who were still poachers when they learnt that I was the one informing the authorities about their plans,”

“This was a hard decision to make. But I told myself that even if I went back to the poaching I would still die. So I would rather die with my children at home than in the wild,” said the father of eight.

He at the same time had demands from his community, who were unhappy that he would no longer provide them with bushmeat.

He would later start keeping livestock such as goats and pigs. Savings from this business led to Tumushabe buying a motorcycle that earns him a reasonable amount at the end of the day.

Through this, he has been able to continue educating his seven children, after losing one.

But this is not the only benefit that Tumushabe has, he can now get meat from his farm, at any time without needing to go to the park.

Today, Tumushabe is not only a former poacher but an influential person in his community. This is after he was able to convince more than 100 other poachers to stop the vice.

He and other poachers have formed groups that are now engaging in beekeeping and pig farming in Kanungu district, where there are 3 conservation groups namely Kimbari (Kameme) Parish with 31 members, Gwerere with 32 members and Ambara with 65 members.

Among those who have given up hunting activities are men and women.

He is now a pig farmer under the associations after the government gave them 20 pigs for rearing. 40 bee hives also where he can harvest and sell to make an income with other association members.

These activities have not only provided them with alternative sources of income but have also kept them busy reducing the temptation of hunting wildlife.

According to UWA’S Senior warden in charge of the Southern sector in Queen Elizabeth protected area Isaiah Bwire, this is a collective initiative between the Uganda Wildlife Authority (UWA) and non-governmental organizations such as the World Wilf Fund (WWF).

“This was in a bid to not only boost conservation but also act as an intervention to curb poaching, manage animals to prevent human-wildlife conflict and also promote behaviour change of the community,” he told Rwandanews24.

He said, “It was not easy to convince someone who grew up eating the meat of wild animals until he was more than 60 years old to be a hunter, but their attitude has changed even if it’s just a few of them. We shall continue the campaign and those who quit will help us to educate their friends who are still in the practice.”

According to Dr Simon Takozekibi Nampindo in World Wilf Fund (WWF), the organization is currently setting up a business model that will ensure reformed poachers manage pig farming and beekeeping as well as grow their empires.

They however have to deal with cases of human-wildlife conflict, drought and high temperatures that sometimes cause miscarriages for the group’s pigs.

This comes as they hope to influence other members of the community who are still poachers to stop the vice.

For Tumushabe, he hopes that the future will be bright for his children, even as he has set them a foundation, for sustainable businesses they do throughout a lifetime.

Queen Elizabeth National Park, one of the most visited Uganda’s Savannah national parks in western Uganda. Queen Elizabeth National Park is in the Western Region of Uganda, spanning the districts of Kasese, Kamwenge, Rubirizi, and Rukungiri. The park is approximately 400 kilometres (250 mi) by road south-west of Kampala, Uganda’s capital and largest city. The town of Kasese is just outside the North-eastern edge of the park, while the town of Rubirizi is just outside the park’s South-eastern boundaries.