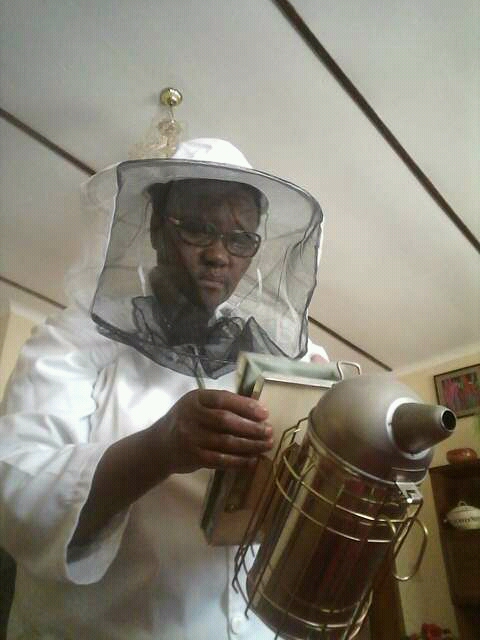 MAFETENG – In the rural district of Mafeteng, Lesotho, lies a small village called Motsekuoa in which the Convent of the Handmaids of Christ the Priest is located. This convent is home to 58-year-old Sister Julia ‘Masina Mafike, H.C.P, a nun who is making strides in conserving biodiversity through beekeeping.

The United Nations Environment Programme (UNEP) states that bees are part of the biodiversity on which we all depend for our survival. They provide high-quality food, honey, royal jelly, pollen, and other products such as beeswax, propolis and honey bee venom.

According to the bee experts at the Food and Agriculture Organization (FAO), a third of the world’s food production depends on bees.

Short for Julia ‘Masina Mafike, JMM Beekeeping is a women-led initiative that produces and sells organic bee products while also nourishing and restoring the environment, which was degraded before the initiation of the project.

Sister Mafike revealed in an interview that the challenges they had in their area entailed: environmental degradation, loss of biodiversity, lack of jobs for the local communities and a need for their religious congregation to become sustainable in providing food for its congregants without depending on external assistance.

With a huge smile on her face, Sister Mafike declared that “JMM Beekeeping is also an initiative towards Pope Francis’ call to climate action as he has emphasized the importance of environmental protection since the beginning of his papacy.  For those who do not know, Pope Francis chose his Papal name, Francis, to honour Saint Francis of Assisi, the Patron Saint of those who promotes ecology.”

“Our vision is to provide natural remedies that are of medical and nutritional value and to develop a friendly environment for both bees and human beings,” she highlighted.

Furthermore, UNDP through the Global Environment Facility (GEF) Small Grants Programme (SGP) together with a local company, Technologies for Economic Development (TED), JMM Beekeeping Farm got financial help which among other things helped JMM to attend an Exhibition in Durban, South Africa last year where JMM met and sealed a deal with ALASEAL, a huge honey producing company from Egypt.

Sister Mafike clarified that the United Nations Development Programme (UNDP) financially helped JMM to take its products to be tested at the National University of Lesotho Innovation Hub. UNDP is also continually marketing JMM Beekeeping on its social media platforms.

The farm has also signed a Memorandum of Understanding (MOU) with the National University of Lesotho through the Department of Nutrition whereby JMM has committed to giving an award to the best performing student in the Bachelor of Science in Nutrition during the graduation ceremonies.

“Many people think bees just produce honey and they have no clue that bees do more than that, they also pick up pollen of different flowers and spread it, allowing plants including many food crops to reproduce so that we all get food,” Sister Mafike disclosed.

JMM Beekeeping currently has 4 employees. Its products are currently sold as far afield as Eswatini and many other Southern African Development Community (SADC) member states. It is now a centre of excellence in Lesotho. It provides training to the youth, emerging farmers, individuals, groups and organisations.

JMM Beekeeping encountered challenges which include heavy rains that were experienced in Lesotho earlier that affected honey production.

Sister Mafike admitted that the environment is currently thriving and nourished compared to when she first started the initiative, she credited the availability of a variety of birds that harbour on trees, various plants, increased livelihood and saved soil. Her biggest dream is to see more Basotho women getting into beekeeping.

During the5th UNEA, UNEP Executive Director Inger Anderson indicated that nature-based solutions are actions to protect, conserve, restore, sustainably use and manage ecosystems for the benefit of people, economies and the planet. This is in line with what Sister Mafike is doing and hopefully more women across Lesotho and beyond will emulate her to address climate change while also implementing nature-based solutions.

Technologies for Economic Development (TED) Director and Sustainable Development Goals (SDGs) Activist ‘Mantopi Lebofa indicated that conserving biodiversity is vital in the fight against climate change as biodiversity is integral to a healthy and stable environment and that diversity of life ensures environmental resilience, provides humans with the life systems on which they rely and enriches life on earth.

In the case of SDGs, Ms Lebofa emphasized that beekeeping helps Lesotho to achieve nearly all the SDGs, “With beekeeping you reduce poverty (SDG 1) as it is a low-cost income-generating activity and equipment can be sourced locally, providing farmers with an opportunity to sell locally with value-added products, creating jobs and contributing to economic growth (SDG 8).”

“JMM is training schools about the importance of beekeeping as Education for Sustainable Development (ESD) which is the purpose of education (SDG 4) and also igniting the indigenous beekeeping knowledge. Most people may have known beekeeping as a male activity, but JMM as a woman-led enterprise has changed that and has also introduced it to people with disabilities (SDG 5),” Ms Lebofa further indicated.

She added that “Beekeeping promotes innovation and industries (SDG 9), helps in reducing equalities as it provides livelihoods also to the poor, bringing both the poor and well-off together (SDG 10) in partnerships and supporting financing of the sector while also bringing all sectors together (SDG17). It is clear that beekeeping helps in the restoration of ecosystems and rangelands (SGD 15) as it supports pollination and thus biodiversity conservation.”

When UNEP celebrated its 50th anniversary (UNEP@ 50) in March this year, the scientific community sounded an alarm on the nature crisis and its principal causes: habitat loss, over-exploitation, pollution and climate change. UNEP states that an example of the impact of biodiversity loss on human wellbeing is the case of pollinators, such as bees and other insects whose abundance is declining rapidly, but upon which we all depend for the bulk of our fruits and vegetables.

UNDP, GEF Small Grants Programme National Coordinator Nthabiseng Majara signposted that GEF-SGP in Lesotho is participating in the SGP Innovation Programme on Nature-based Women-led Enterprises, highlighting the important role played by women in conservation and promoting social inclusion to ensure that no one is left behind.

She said Technologies for Economic Development (TED) as an SGP Grantee partner is implementing a strategic project titled Removing Barriers from upscaling Beekeeping and Production of Wool and Mohair products in Lesotho and JMM Beekeeping is regarded as one of the women-led “hotspots” enterprises in massive beekeeping products value-chain production falling within the GEF-SGP funded projects.

Ms Majara said through the project, Women Entrepreneurs are trained to sharpen their skills in beekeeping, marketing, pricing and Beehive production. The project also provides a small fund from which the enterprises can access funding to improve their businesses. It also implements the Sustainable Development Goals (SDGs) and the National Strategic Development Plan (NSDP II) which aims to transform Lesotho from a consumer-based economy to a producer- and export-driven economy.

These grants are in support of the African Green Stimulus Programme (AGSP) elements on prioritising financial and technical resources thus securing and restoring livelihoods. Sister Mafike is a true example of the motto of the AGSP to enhance ambition and upscale implementation of the existing green economy through climate change projects like JMM Beekeeping.

African Climate Development Initiative (ACDI) Masters Candidate Koaile Monaheng opined that bees tell us a lot about our environment and climate. He indicated that the relationship between plants and bees is negatively impacted when there is a delay in Spring, i.e. late spring because the Winter season is extended.

“Bees depend on flowers for pollination, if it is not warm enough, we won’t see them. Climate Change has altered the habits of both plants and bees, and the long-term effects of these changes, start to affect the food system as well. Bees are exceptionally important to agriculture, particularly for Lesotho which is one of the most food-insecure countries in the world.  Safeguarding biodiversity and safeguarding bees and pollination can yield great returns which may be invisible to the naked eye, but according to FAO, pollination is the highest agricultural contributor to yields globally, it contributes far beyond any other agricultural management practices,” Monaheng emphasized.

This October, when world leaders gather in Montreal Canada, at the United Nations Biodiversity Conference, they are expected to finalize the post-2020 biodiversity framework, which calls for amongst other things, the reduction of pesticides by at least two-thirds by 2030. The conference will also look at the implementation of protocols of the Convention on Biological Diversity (CBD) that deal with fair and equitable sharing of benefits from the use of nature and safe transport, handling and labelling of Living Modified Organisms.

The Government of Lesotho, National Strategic Development Plan II 2018/19 to 2022/23 states that Lesotho has developed policies and frameworks to address climate change and environmental degradation and interventions include tree planting, land reclamation, protection of wetlands and other biodiversity and conservation programmes. It has also mainstreamed gender as a cross-cutting topic affecting the development of Lesotho on many levels, thus focusing on inclusion and actively involving women in contributing to solutions that will foster economic growth and alleviate poverty.

Sustainable Development Expert Lerato Mahamo called everyone to action and urged people to engage in development that meets the needs of the present without compromising the ability of future generations to meet their own needs.

Mahamo said sustainable development focuses on developing techniques to meet the current requirements without damaging the environment and that bees are critical for achieving sustainable development because they provide a range of ecosystem services that contribute to the wellbeing of people whilst maintaining the planet’s life support systems.

The Conference of Parties (COP 26) highlighted the areas needing specific progress in the lead-up to COP 27, including emission reductions, adapting to the impacts of climate change and climate finance, with a focus on finance for adaptation. At COP 26, governments agreed on the need to provide more support to developing countries and called for adaptation finance to be doubled hopefully people working so hard in biodiversity conservation like Sister Mafike would benefit from such funding.

This article is part of the African Women in Media (AWiM)/UNEP Africa Environmental Journalism Programme.