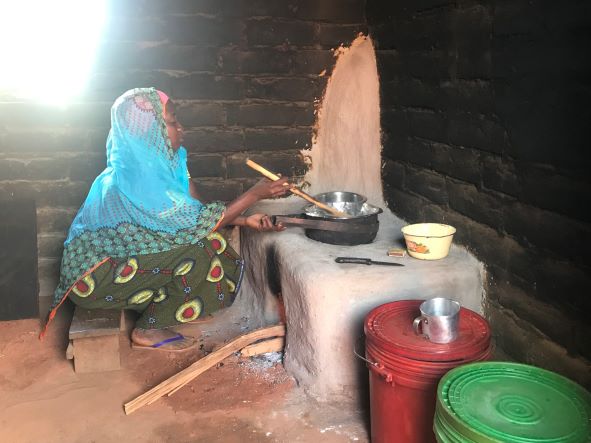 It is a Tuesday morning when I arrive at Miyuyu village in Newala District, Mtwara Region located in the southeastern part of Tanzania. People seem busy with the preparations for the day ahead. The women food vendors are preparing breakfast using improved cook stoves and some young men are cleaning their makeshift hair cutting salons ready to welcome the villagers.

Though the village has no grid electricity, the youths can operate their salons using solar power units thanks to intervention by a local Non-Governmental Organization which seeks to improve the living standards of the youth and women in rural areas.

Owing to the effects of climate change, only a few years ago, it would have been impossible to find many women in the village as most of them were forced to travel long distances in search of firewood. But that has changed and now they are participating in taking care of a forest established near their village.

This is because the new improved cookstoves they are using have helped them to save a lot in terms of firewood. A bunch of firewood, which lasted for a day using the old cookers can now be used for up to three weeks.

This means that they have stopped felling trees for firewood and they save a lot of time which they use for other social and economic purposes.

Women are the most beneficiaries of the innovation and they said in separate interviews that they now feel liberated through the introduction of the new efficient cookers through a project financed by World Wildlife Fund (WWF) and Mtwara Action for Self-Help Activities (Masha), a Non-Governmental Organization based in Mtwara.

One of the beneficiaries, Ms Daima Abdallah, says, “This project has helped us a lot. First, the cooker helps me to cook two things at a go. But most important of all is that we now use very little firewood. For instance, a bunch which lasted for one week in the past can now last up to three months. I can use two or three pieces of firewood for my cooking all day.”

She says that because they use less firewood, the problem of tree felling has significantly reduced in the village.

“I only go to fetch firewood once every month while in the past I was doing this every two or three days,” she narrates, noting that this leaves her and fellow women in the village with more time to engage in other social-economic activities.

For her part, Felister John notes that they have even started a vegetable and fruit drying project because they now have time and resources to do so.

“We have started a vegetable and fruit drying project. We have been supplied with facilities which enable us to preserve vegetables and fruits, which are usually perishable, but they can last for up to a year,” she says, noting that this has enabled them to earn extra income.

Community Development Officer in Newala District, Ally Said, notes that the environment protection project at Miyuyu village has been beneficial and exemplary.

“In the past tree felling for firewood and charcoal making was rampant in the village. This threatened the environment and water source at the village,” he says.

This is the case not only in Miyuyu village but in many rural areas where similar projects are being implemented. The project was introduced after it was noted that if not checked the rate of environmental destruction will render life impossible in many areas.

The situation was worse as noted recently in Tanzania Parliament by a female MP, Hon Tunza Malapo from Mtwara who said when contributing to the Ministry of Water budget for 2022/23 that villagers in her constituency used water from watermelon to cook rice when one minister visited them.

“They did this not to show their expertise in cooking and recipe, but due to shortage of water in the village,” she noted.

The ugly face of climate change has not manifested itself in rural areas only. Only recently, the local media was awash with frightening headlines such as an islet in Pangani District in the Tanga region located in a coastal region on the verge of sinking in the ocean. The government built a strong wall along Ocean Road in the commercial capital Dar es Salaam to save the road and nearby areas from being washed by strong sea currents.

Researchers have established that climate change is one of the factors which contribute immensely to economic losses through environmental damage.

Rising global temperatures have led to massive melting of polar ice, thus increasing ocean depths and swallowing low lying islets as in the case of the Pangani District.

Environmentalists say that there is no better way of countering the negative effects of climate change other than changing lifestyles as done by villagers at Miyuyu who now use efficient cookstoves thus saving their forest.

Ms Maimuna Kabatesi, Country Engagement Manager for Voices for Just Climate Action, at Humanist Institute for Cooperation with Developing Countries (Hivos), says it is encouraging that some youths have formed or joined groups which implement projects related to environmental protection. He named such groups as Africa Youth Initiative on Climate change (AYCC).

She said globally there are nations which have also managed to engage children in the fight against climate change.

“It is good if young people are involved because climate change affects their lives. So, it is good to teach them how they can participate in ensuring that they create a safe environment for their lives. If we don’t take action now, their lives will be jeopardised in the future,” she says.

But such programmes are hard to undertake in developing and poor countries as the costs of attending international meetings where such programmes are planned hinder many from third world countries from attending. She notes, for instance, that only a few young people do attend large meetings such as COP which discusses in detail issues of environmental protection and climate change.

“It is unfortunate that many governments and private sector do not embrace ideas from youths on environmental protection and climate change issues. But new strong voices of young people on these issues can lead to new ideas which will help us fight this problem,” says Ms Kabatesi.

Not to be outdone by others, Tanzania has charted its strategies to make sure that the achievement of goal number 13 does not elude the country.

The strategies also involve the participation of private sector institutions, one being TaTEDO, whose director, Estomih Sawe, notes for instance, that many institutions which bring together large groups of people like schools, use a lot of firewood and charcoal is inevitable.

But, this can be reversed if wood and charcoal are substituted with another kind of energy or efficient cookers are used instead of current ones.

“Similar thing can be done in urban areas where charcoal is the major cooking fuel for many middle and high-income families. It is possible to gradually make the changes through technology which will reduce the amount of wood and charcoal used for cooking,” he says.

TaTEDO has invented modern burners which use 70 per cent less charcoal or wood compared to common cookers used by many families.

“We aim to spread this technology among young people, women and institutions to enable these groups to take part in environmental conservation. If young people in educational institutions are involved in such programmes, they will be good environment protection ambassadors when they return to their communities,” he says.

He notes that this has started to bear fruits as in 2018 they managed to reach out to 7,840 youths in groups across the country through eight civil societies.

“When you deal with the environment you also have to deal with human rights as the livelihoods of many people depend on the surrounding environments. Our target is to work with villages and when we distribute these improved burners in education institutions we enable them to eat well and save a lot of time which they used to fetch firewood,” he says.

A cook at Community Development College in Mtwara, Ms Hadija Ahmed, says for a long time they have been using traditional burners in cooking which use a lot of wood and produce a lot of smoke.

“This firewood is collected by students meaning they had to stop doing other things to fetch firewood,” she says.

But after the introduction of modern burners provided by TaTEDO, the amount of firewood they use has decreased tremendously thus working a long way by reducing indoor pollution affecting the health of women.

This is also in support of the African Green Stimulus Programme elements on prioritizing clean energy investments to help close energy access gaps and improve air quality while tackling pollution. This is because the initiative of a clean cooking stove also goes a long way in supporting the sustainable management of forests by reducing deforestation.

These villagers in Miyuyi indeed live the motto of the Africa Green Stimulus Programme to enhance ambition and upscale implementation of the existing green economy through these climate change projects.

“Besides using less firewood, our kitchen is now clean and is a safe place to work as there is no smoke,” she narrates.

A similar situation is the case at Mnolela Secondary School in the neighbouring Lindi Region. The headmistress, Ms Adelfina Mbonde, says before receiving the efficient burners from TaTEDO the school was using an average of 3,200 pieces of wood a day but with the burners, the same amount can be used for 26 days.

She says in the past students spent two days in a week fetching firewood to get 20 pieces each. But now each student is required to provide only five pieces a week.

As the countries gear up for the 27th United Nations Climate Change Conference, popularly referred to as COP 27, to be held in Sharm El-Sheikh in Egypt later this year, it is anticipated that more initiatives proffering solutions will be developed to help women and youth mitigate adverse effects of climate change just like it is done in Miyuyi village. The time to act is now.