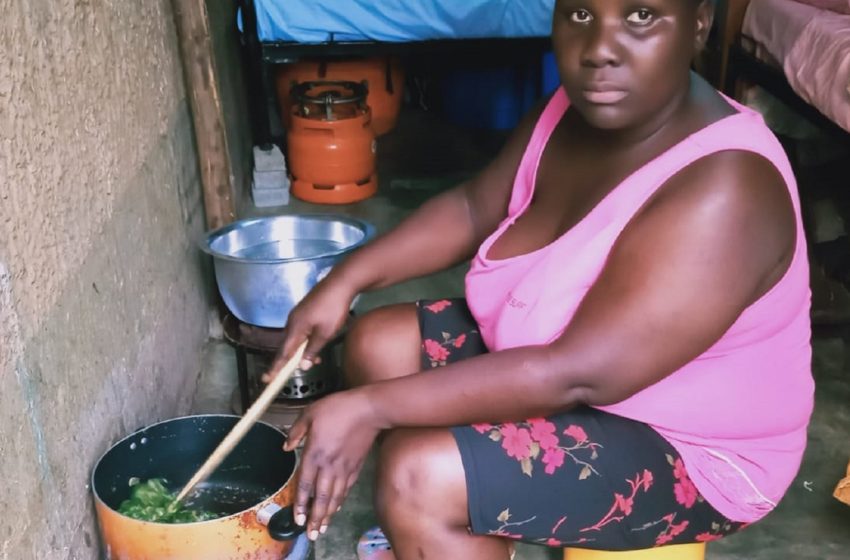 In one of these many overcrowded houses, live Fauziah Mbarak and her grandchildren. Years ago, when the prices of liquefied petroleum gas (LPG), which is cooking gas, dropped and access became easy as traders set up refilling shops nearby, she was happy. She says, she almost felt at par with Kenya’s affluent who have been using cooking gas for years.

“I can no longer afford to refill my cylinder. The day that I found that prices had risen again, I bought kerosene instead,” she says.

Her small-roomed house now reeks of a strong odour of smoke and kerosene. This odour irritates her, she says, but she has no option but to keep using a kerosene stove and tin lamp.

“I buy kerosene for Sh40 ($0.35) every day, which I use to cook and for lighting. It doesn’t last long so when it’s over and I don’t have money I pick kerosene on credit. Sometimes they give me, other times they refuse,” she says.

Ms Mbarak is not the only one.  A majority of Kenya’s women in urban slums depend on informal work and most of them lost these jobs during the Covid-19 curfews and lockdowns. Even as the country returns to normalcy, some are yet to get casual jobs as the high cost of living has forced families to cut out expenses such as hiring extra domestic workers.

With no casual jobs, the urban poor women lack daily wages to buy cooking gas, especially after the price rose to an eight-year high in January 2022. They dropped cooking gas for kerosene or charcoal or a mix of both.

Of concern is the effect of unclean cooking fuels on the environment and indoor pollution. Indoor pollution and overuse of charcoal will also lead to an increase in respiratory diseases, especially in children and women.

Ms Mbarak is already seeing the effects of using a kerosene stove.

“Inhaling the kerosene fumes affects my chest. So I have been forced to leave the stove out but my neighbors complain because these houses are so close together that the smoke from my stove seeps into their houses too,” she says.

Her energy problems stretch to the lack of affordable electricity for lighting. At her previous home, also in an informal settlement, she would pay Sh200 ($1.74) to get electricity illegally.

“When Kenya Power nabbed the landlord and disconnected the illegal electricity, I moved here where I have to use a kerosene tin lamp,” says the 51-year-old woman, adding that to save on the kerosene, she now has to sleep early.

The high prices have seen Kenya fall back on its push to scale up clean cooking in urban slums. LPG penetration increased rapidly over the past ten years, especially in Nairobi.

Kenya National Bureau of Statistics shows that one in every four Kenyan homes is primarily dependent on LPG as cooking fuel. About 55 percent of households use firewood, 12 percent use charcoal and 8 percent use paraffin as their main source of cooking fuel.

Also, the return to dirty fuels raises concerns about the increase in carbon emissions and deforestation. According to World Bank, charcoal production is the leading driver of deforestation in Africa and endangers an estimated 850 million to 900 million people who cook with charcoal and firewood.

“Pollution is, quite simply, deadly. All life lost is a tragedy, of course, but let us give some scale: Covid-19 has caused close to six million deaths in two years. Indoor and outdoor air pollution alone causes seven million premature deaths every year. We stopped the world for Covid-19, yet we let it spin on with pollution,” said UNEP Executive Director, Inger Andersen during the 5th  UNEA meeting held in Nairobi last month.

Josephine Leshao lives in Nairobi’s Rongai estate, a middle-income neighbourhood. Three years ago, she too stopped using LPG. Now she cooks with charcoal.

“I spend all my money on eye cancer treatment, to take care of my son who has cerebral palsy and my old mother who is disabled. I don’t have a steady job to sustain a high monthly budget so I put away my gas cooker, now I use charcoal,” she says.

To save on the charcoal and protect her remaining eye from getting irritated by the smoke, she only cooks once.

“I have to cover my eye while cooking because the embers from the charcoal fire and smoke affect it. So in the morning, I cook all meals for the day; porridge for breakfast, ugali and vegetables for supper and I boil water and put it in the flask for bathing in the evening,” she says.

Ms Leshao buys charcoal for Sh60 ($0.52), which she uses for two days. But occasionally she buys a big sack that takes her four months.

“Cooking with charcoal is cheaper but it is not as fast as gas, it’s cumbersome to light and use,” says the 44-year-old.

The lack of access to clean energy amplifies the vulnerabilities of poor women. Because of changes in prices, a majority of these women try out different energy products, depending on their cost. For instance, Ms Mbarak has used many fuels as she tries to pick one that is cheaper. She had a jikokoa, a charcoal stove designed to reduce fuel consumption by more than 50 percent and harmful emissions by more than 60 percent.

“I find it hard to light. I’d buy charcoal and paraffin to light it, which is too costly for me,” she says.

Then she bought a Koko stove. Koko is a company that sells ethanol-gel for cooking which is environmentally friendly. Because ethanol is a by-product of sugar production, which is agricultural waste, the fuel is safer.

But Fauziah says the ethanol gel used on the Koko stove is not energy-saving.

“I think the ethanol evaporates fast even when not in use. So I keep refilling,” she says.

However, Millicent Amtani, who lives in another low-income neighbourhood, Kariobangi in Nairobi, prefers the jikokoa.

“It’s the initial cost is high, but it uses little charcoal. I have the traditional jiko [stove], jikokoa, gas stove and kerosene stove. I stopped using gas last month when prices hit Sh1,550 ($13.51). Even if charcoal has gone up by Sh40 ($0.35) per tin, it is still cheaper than cooking gas. For jikokoa, I use a tin of charcoal four times while for a normal jiko, I’d use the amount of charcoal twice,” she says, adding to also save on the charcoal, she cooks once.

“I cook supper and breakfast in the evening using the charcoal. So ugali, vegetables and porridge which I put in the flask to be taken in the morning,” says Ms Amtani, a mother of three.

However, the shift to renewable energy, especially solar, favours rural households which are scarcely populated and structured, unlike urban slums. For instance, an estimated 500,000 rural households have solar home systems.

“This success has been largely due to the private sector. Companies such as M-Kopa, Sun King, Mobisol and Azuri offer consumers a battery package that is capable of running three or four lights, a TV, and a sound system. Payment modes vary; with most clients paying monthly by use of mobile platforms for three years before taking full ownership of the equipment,” notes the Energy and Petroleum Regulatory Authority (Epra) in a 2020 Energy and Petroleum Statistics Report.

Ernest Chitechi of Kenya Climate Innovation Centre says the return to the use of charcoal and kerosene by low-income earners will set back Kenya in its fight against indoor pollution.

“These fuels are the greatest contributors to indoor pollution in Kenya. Users are prone to breathing the smoke which affects them,” he said.

Mr Chitechi says that instead of using charcoal and kerosene, low-income earners can cook with sustainable bioenergy fuels such as biogas, briquettes and pellets which do not emit smoke and are odourless. Briquettes and pellets are produced by compressing biomass residues like charcoal dust, sawdust, other wood remnants, or agricultural byproducts into a solid piece that is used as charcoal or firewood.

“The briquettes and pellets made from biomass waste cook longer and faster, so a person ends up saving unlike if they use kerosene or charcoal which burns fast. A bag of briquettes roughly costs Sh250 and it lasts longer,” he said.

Research has shown that the use of slow-burning briquettes reduces household cooking energy expenditure by 70 percent if families produced their own, and 30 percent if they bought briquettes from other sources.

This article is part of the African Women in Media (AWIM)/UNEP Africa Environment Journalism Programme.