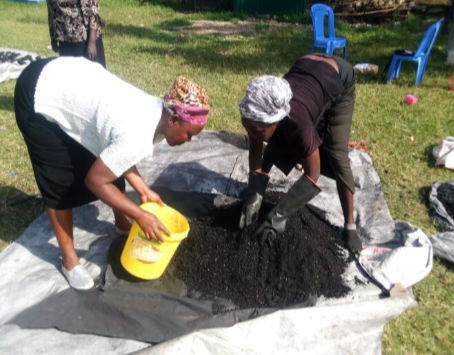 In the busy Nyalenda slums in Kisumu City, elderly women are kneeling down on a white gunny bag, spreading some black substance.

The 25 women and five men organised a group christened United Destiny Shapers (UDS) a community-based organisation that makes briquettes as an alternative source of clean and safe energy.

This has been their routine, as it has become a source of livelihood to them and since a majority lost their sources of income in 2020 when the Covid-19 pandemic hit hard.

When they are not in their homes going about with their daily chores, they are busy at the offices either making or sun drying the already made briquettes. They have devoted their time to this venture.

Five years ago, Practical Action, an international organisation, took them through various clean energy training as a way of conserving the environment.

“The idea of briquette making started a long time ago. Each of us was individually making the products on their own for their domestic use, ’said Pamela Awino who chairs the group. They were then 17 in number.

It was after the training that Awino picked the 17 who appeared determined to take up the challenge.

The organisation which trained them then donated some briquette moulding machines.

The women take charcoal dust, sieve them and mix with cassava porridge.

“We normally sieve the charcoal dust so as to get the smooth powder from large particles, which we mix with the sawdust. We again mix the two with cassava porridge so that it is a sticky mixture,” explained Phelisters Ombura, one of the members.

From the community, they are able to gather all the raw materials, dust from charcoal sellers and sawdust from carpenters are readily available.

Cassava is bought from local markets. The cassava porridge serves as a glue that binds the mixture together, unlike water which causes some cracks hence breaking.

“A full sack of 40kg of charcoal dust is mixed with 1 kg of sawdust, ’she said.

So the mixture is fed in the machine which produces briquettes, thereafter they are cut into desirable sizes.

The machine is operated by one of the men due to its heavy capacity.

The already made briquettes are put in the sun to dry for three sunny days as they wait for an order from clients.

The group members say briquettes as a source of fuel are cheaper than charcoal, for instance,5kg of briquettes costs Sh250 (around $2.5) compared to 5kg of charcoal which costs Sh500 (around $5).

“Many people still don’t know the importance of briquettes, so we urge them to embrace this source of energy because it’s clean, safe, no smoke while cooking, lasts longer and you won’t get dirty when you touch them, ’said Awino.

According to Awino, briquettes are three times more convenient compared to charcoal.

Lack of marketing channels remains one of their biggest challenges, as well as lack of machines used to dry the briquettes.

‘’If we could also get a machine used to grind charcoal dust into small particles then we would be so glad, ’she added.

The ever increasing price of charcoal dust and sawdust is also emerging as a new challenge, with the group members saying a 40 sack of sawdust and charcoal dust now cost Sh400 ($4) from Sh200 ($2) and Sh700 ($7) from Sh250 respectively.

They are anticipating expanding the project to meet the needs of their clients who are majorly the locals and the neighboring restaurants.

Their future plan is to increase the production of the briquettes for them to cater for the bills, purchase more machines and vehicles to aid them in deliveries.

“This venture helps us to cater for the bills of our households. We come from humble backgrounds and the majority of us are sole breadwinners for our families. Some members here are single mothers and widows, so the money we get from this really helps us a lot, ’said Awino.

They are also planning to establish their own website to make marketing easier, and also have their products certified by the Kenya Bureau of Standards so that they can venture into formal markets like supermarkets.

Environment experts have always pointed out that using briquettes for cooking is more advantageous compared to charcoal wood. It helps in reducing deforestation and in this way we utilize the available resources, it’s more sustainable with regards to conserving our tree cover.

According to UNEP, charcoal burning emits a lot of carbon monoxide into the atmosphere. Carbon monoxide is one of the greenhouse gases that result in a global warming phenomenon that the world is trying to mitigate.

It also results in respiratory complications because of the inhalation of carbon and can sometimes cause death.

Clean and affordable energy is goal number seven of the Sustainable Development Goals which is to be achieved by the year 2030. In that regard, a third of the population in the world still use dangerous and inefficient energy cooking systems.

Mr Laban Okeyo, the acting director in charge of renewable energy in the Department of Energy and Industry county government of Kisumu has noted that the usage of clean energy is fairly well and half of the population can access it.

According to the report from the Kenya National Bureau of Statistics 2019 census,49.6 per cent of the population in Kisumu County use firewood for cooking.

78.6 per cent of households use unclean fuel for cooking that is a combination of charcoal, firewood and paraffin while 21.1 per cent use LPG, electricity, briquettes and other forms.

Mr Okeyo has pointed out that poverty is a contributing factor for households in Kisumu (78.6 per cent) to use unclean energy for cooking.

“Not everyone can afford LPG for example. Any person could wish to use clean energy but affordability is an issue, so poverty is a hindrance’’.

Also, some technologies are not available for use for example he has pointed out “biogas is a new thing to many people’’.

The high cost of electricity has made many people shy away from using and lastly the culture where people have a perception that certain food can only be cooked by firewood, LPG and so on.

However, the county government has invested a lot in the promotion and adoption of clean energy, there are programmes and activities geared towards it according to Mr Okeyo.

For instance, “at the community level, there’s a programme called operation nyangile (paraffin tin lamp) out. There are a lot of people who still use paraffin lamps for lighting their houses, so we create awareness about various clean technology for lighting and we focus on solar energy. We go to the community with solar kits, lamps and lanterns, educate them and give them samples. We normally focus on those areas that are not connected to the electricity and help the vulnerable in the community,” said Okeyo. 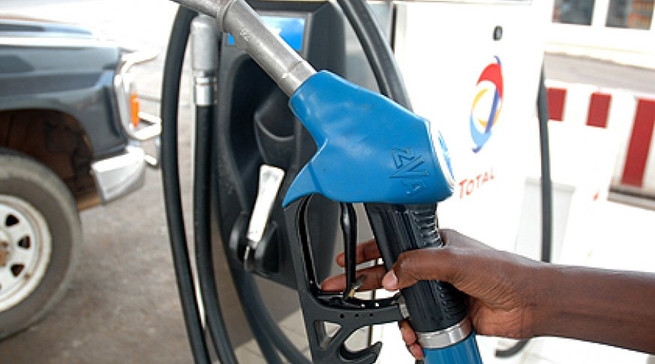 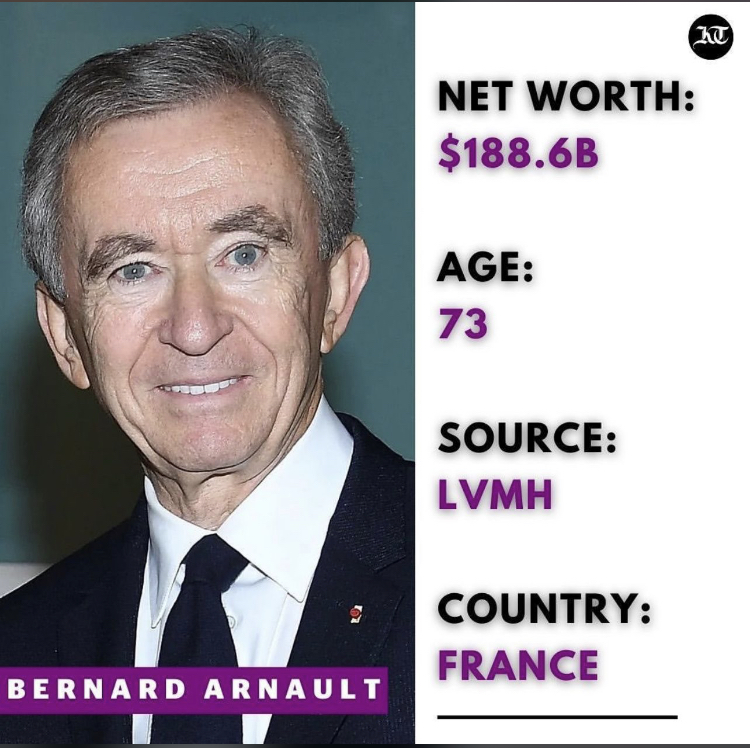 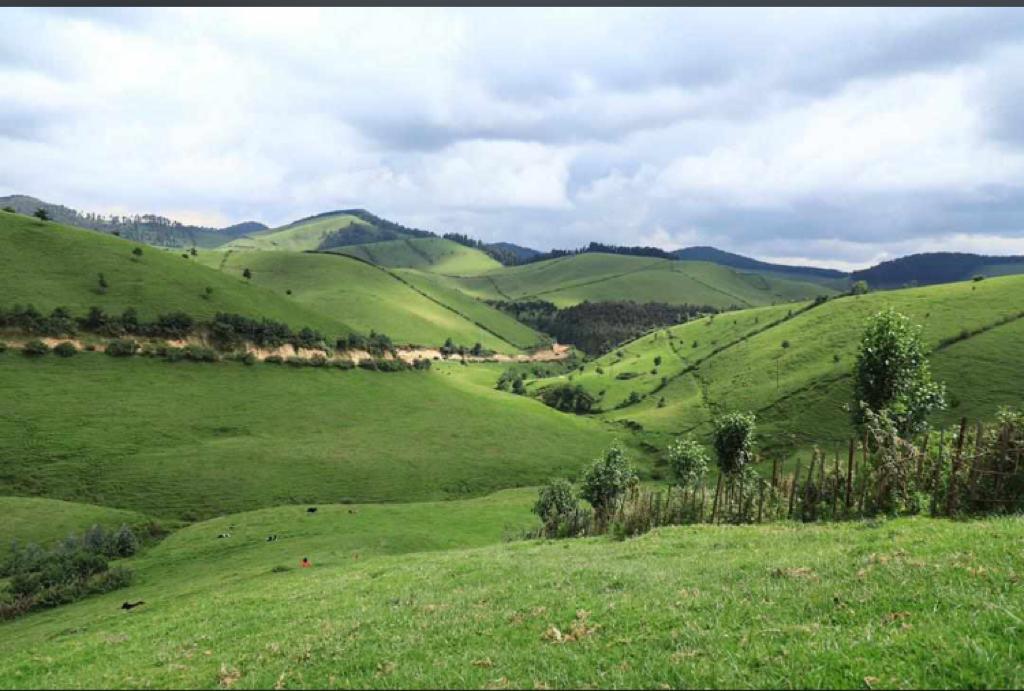