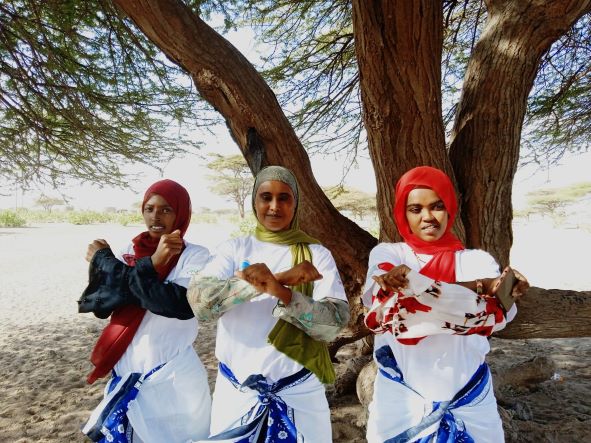 The need to recognize the contribution of women and girls who are leading the charge on climate change adaptation, mitigation and response to build a more sustainable future for all is a call for all.

I have survived in trauma after bouts of droughts destroyed my livelihoods. My life has been depended on the land and what the land can produce. Frequent droughts that occurred recently have changed my life. The most recent drought has devastated by livestock. Before I used to have 17 head of camels and 400 goats but when the drought came, I lost most of livestock due to starvation. The few surviving ones were swept off by a sudden flash flood that came out the blues. All my livestock have been wiped out by climate-related disaster. This has negatively affected my husband and sons who are now withdrawn. Owning livestock means everything to us and such a loss means we have lost our identity, our being as humans. People talk about the impacts of droughts and climate change and they count the money and assets lost. How do I count lives that were lost? How do I count the happiness that was gone with the drought? Climate change has killed my spirit, my being as a human. I sometimes feel like a moving corpse. I spend days wondering and praying and asking God why?

This is a story of Darare Wako from Kenya’s nomadic community of Borana.

Similar stories have been told by women in Zimbabwe, and Mozambique following the devastation of droughts and floods. These stories are well collaborated by the UN assertion that 8 in every 10 people who are most affected by the climate crisis are women.

Judy Nkurimi, Chairlady of the African Independent Pentecostal Church of East Africa said climate change only compounds whatwomen go through. “When a woman losses her husband, even the small portion of land she was left with get forcefully taken. They have to fend for their children from working farms where they get paid. But in the context of climate change, farms are no longer yielding and women are left to suffer,” she said.

Mithika Mwenda, the Executive Director of the Pan African Climate Justice Alliance (PACJA) said “The world this year marks the International Women Day at the backdrop of the recent report by the Intergovernmental Panel on Climate Change which acknowledges that the impacts of the climate crisis is much more widespread that what is known and specifically women. This evidence strongly supports our urgent resolve to demand compensation for loss and damage”.

He said women and girls contribute a lot on adaptation to climate change despite being hit hard by the ravages of climate change.

According to the UN, Climate change is a “threat multiplier”, meaning it escalates social, political and economic tensions in fragile and conflict-affected settings. As climate change drives conflict across the world, women and girls face increased vulnerabilities to all forms of gender-based violence, including conflict-related sexual violence, human trafficking, child marriage, and other forms of violence.

The UN adds that growing crisis of climate change and resultant disasters has affected women and men, girls and boys differently, with many women experiencing disproportionate risks and impacts from disasters and climate change. The crisis has exacerbated pre-existing gender inequalities and also compounded intersecting forms of discrimination that have affected some women to a different degree or in different ways than men.

Discriminatory barriers that limit many women’s equal access to education and information, capital, property, land and productive resources, civil and political rights, legal and justice systems, health care, adequate housing, employment and social protection, increase their exposure to the negative effects of climate change and disasters. These same obstacles also prevent women from being able to actively contribute to decision-making and the development of activities related to climate change mitigation, disaster prevention and reconstruction efforts.

Consequently, women are more likely to suffer from a degraded home, neighborhood, and city environment and to shoulder more of the burden that goes with living in poor housing and communities with inadequate residential and health infrastructure, since they spend more time at home and its immediate vicinity.

Women are significant actors in natural resource management and they are major contributors to environmental rehabilitation and conservation. In addressing some key environmental problems, women play a dominant role.

“Local women, through their roles as smallholder farmers and as collectors of water and firewood, have a close connection with their local environment and often suffer most directly from environmental problems. But this exposes them to other danger, particularly in situations of conflict and compromised security,” said Purity Kendi, Meru Woman Climate Activist and representative of the Mulerene Woman Group, Meru.

Rural women, have direct contact with environment has produced them deep- knowledge about the environment. Thus, women serve as agriculturalists, water resource managers, and traditional scientists, among others.

Subsequently he noted that women are not only knowledgeable about the environment, but they are also protective and caring. Being primarily responsible for domestic and household management, they interact more intensively with the nature and build the environment more than men.